This is the view I woke up to this morning from my window in the kitchen.  I didn't know what was out there last night because it was dark by the time we finally arrived at the apartment. 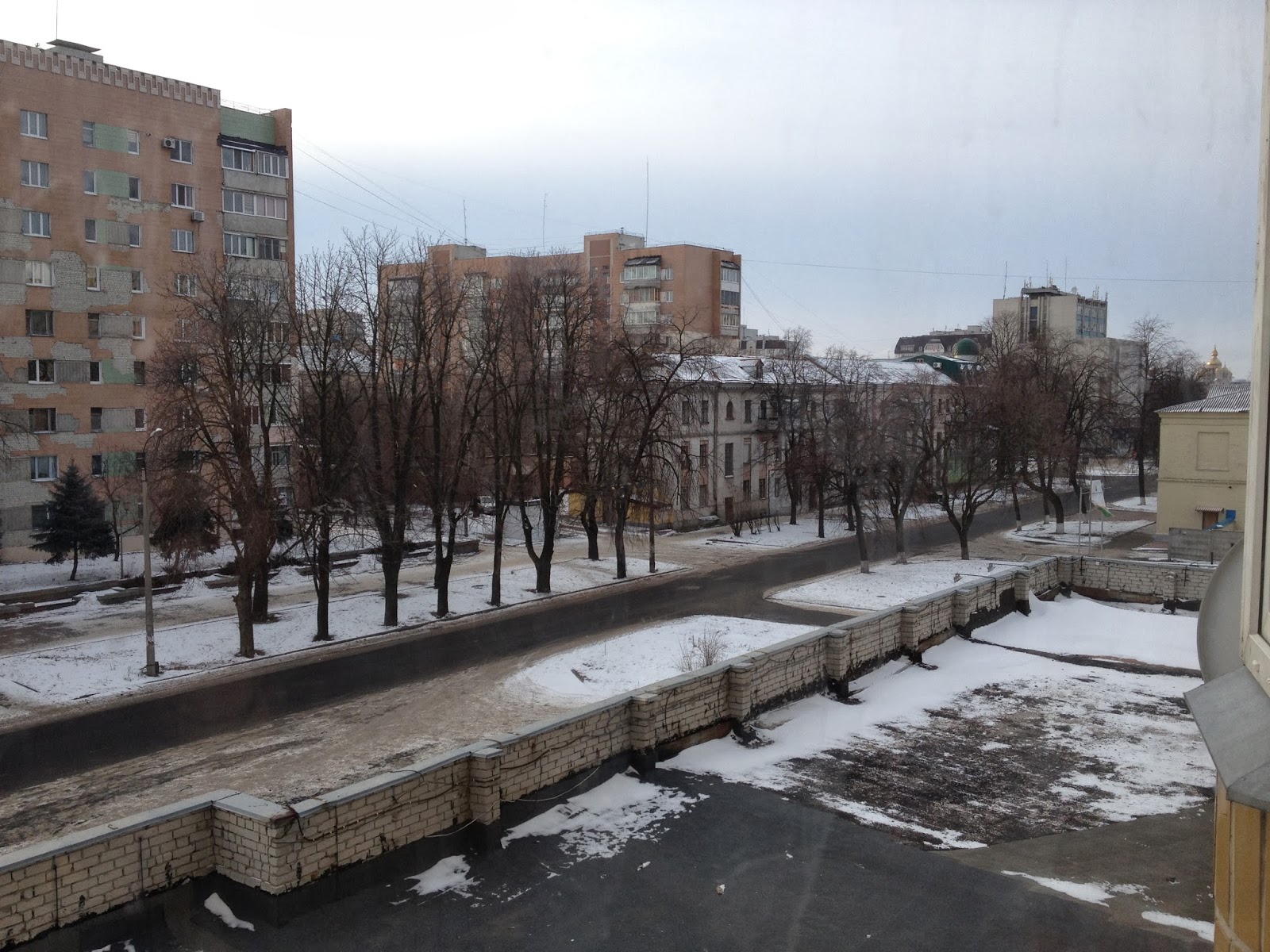 After a mostly restful night's sleep, and boy did I need it, I awoke ready to start day 2 of my adventure here in Ukraine.  A shower was a great place to start and thankfully the hot water was working this morning because I've heard that's not always the case.  A warm shower, some breakfast and a cup of coffee courtesy of Starbucks Via packs and floaty-free bottle water and I was good to go.


Maria told me to be ready to go by 10:45am because that's when the driver would come to pick me up.  I was only slightly nervous as I had no idea who my driver was going to be today and how I would communicate with him or he me.  So I was beyond pleasantly surprised when I opened the door at the base of the apartment building and looked into Maria's face standing just outside.  Phew, a huge sigh of relief.  Then, when I walked toward the car, I saw a glimpse of pink and the only time you see color here is on children so I knew that mine must be in the car already.  Double phew!  Wonderful.  Off to a great start after a wee bit of anxiety.

From the apartment we drove around and saw some sights, some other things that weren't exactly "sights" but still fun to see and yet other things that I truly couldn't tell you what they were, but apparently they were important enough to stop for a "photo."  I heard the words, "Ashley, photo?" all morning, bless Maria's heart.  I never once had to ask because she was on it.  I mean, the woman didn't let a photo opp pass us by.  It was wondefrul!

So, here we are all around town... 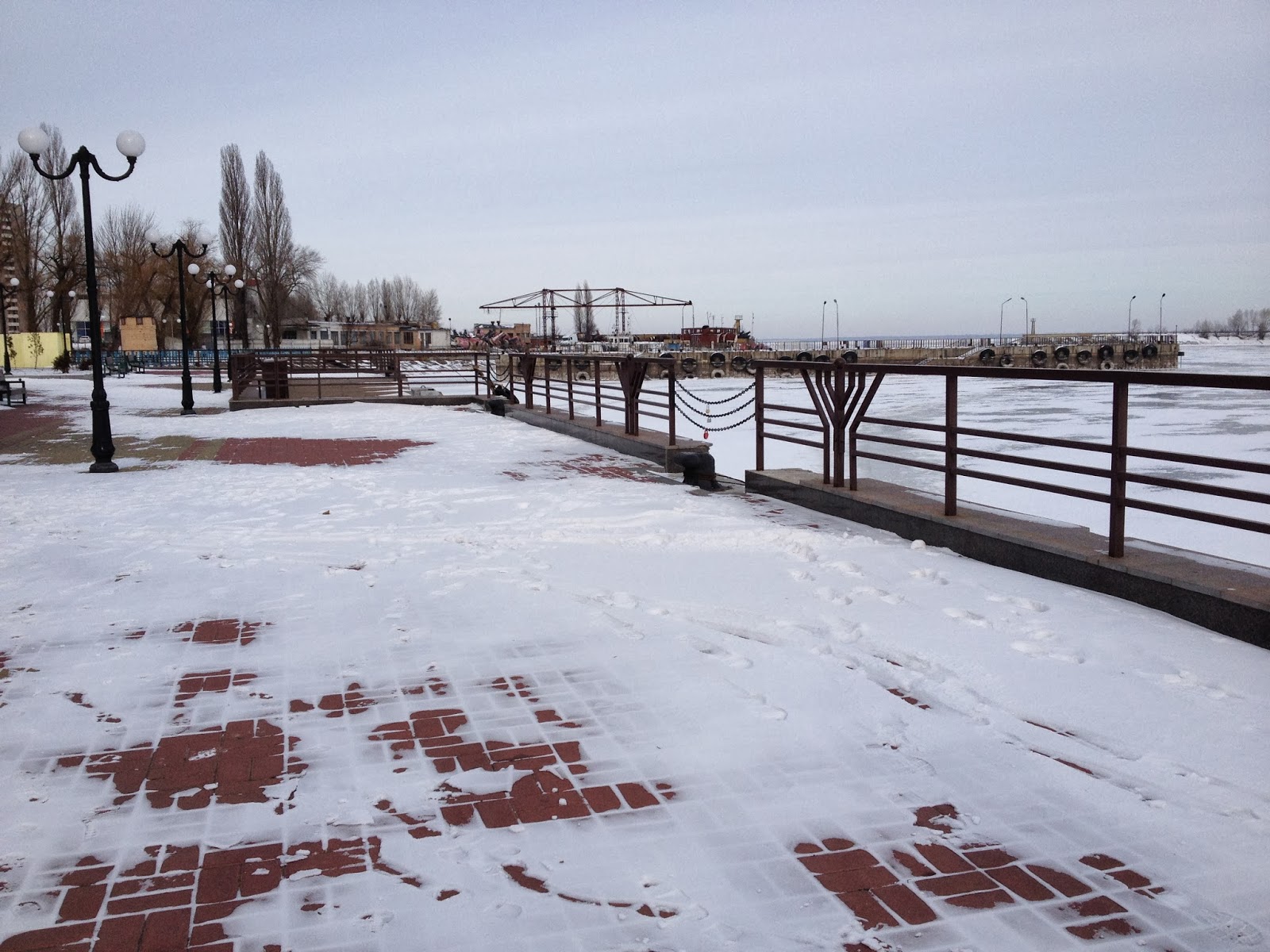 After touring the city for a bit we stopped at a theater to watch a musical.  I wish I could tell you more about that but I'll need to brush up on my Russian a bit first.

A view outside from inside the theater.  Notice those barricades?  Yep, they're to keep rioters who are part of the revolution away.  The opposite side of the barricades have remnants of signs and liquids of some sort that have been lodged at them.  Slightly disturbing. 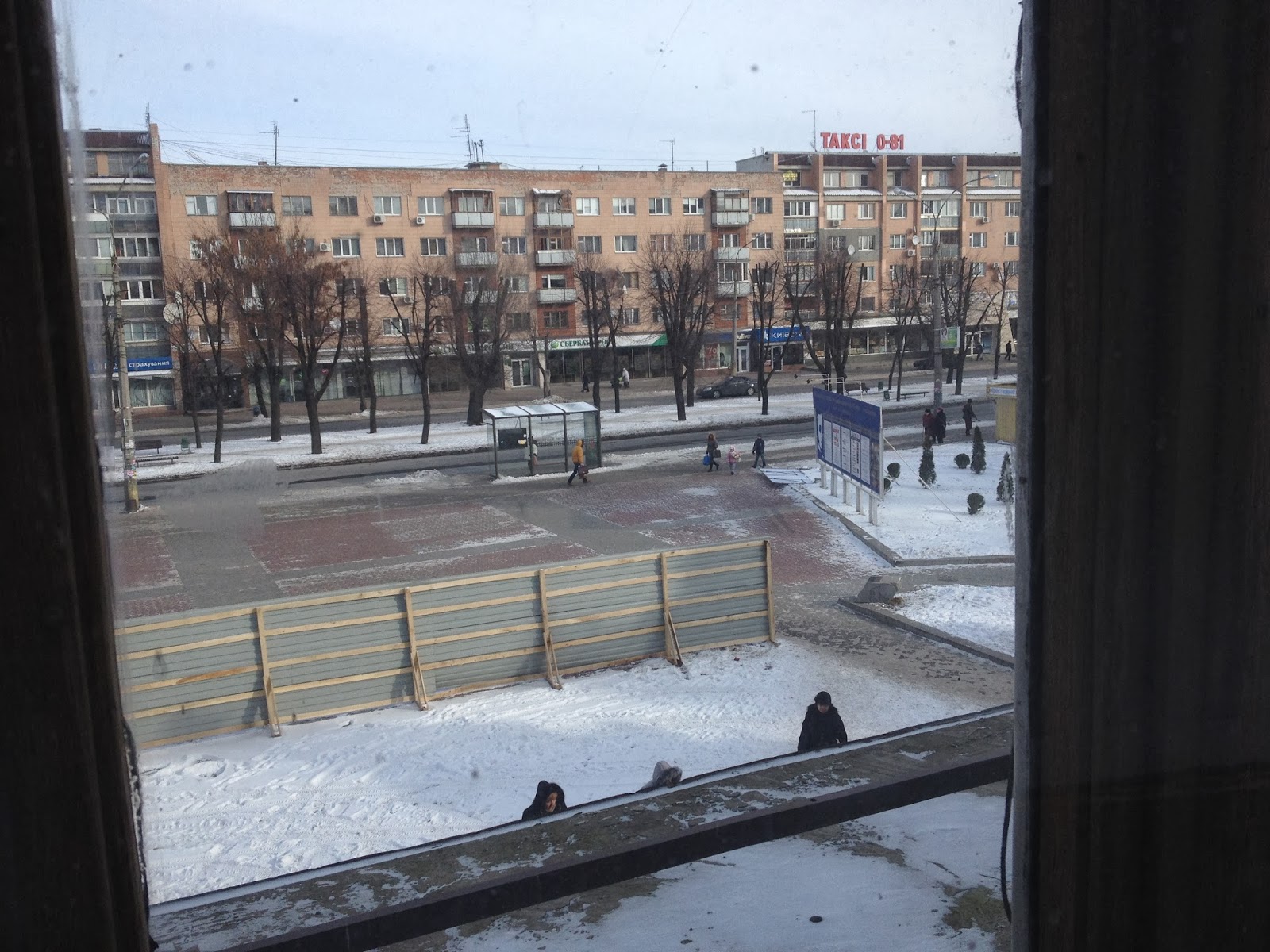 After the show the tour around town resumed.

Our tour concluded and our driver dropped us off back at the orphanage.

Once inside, the children were ushered off to eat lunch and i was fed a 5-plate meal in a small room alone.  Slightly strange, but quite pleasant all the same.  I mean, I never get to eat in peace at home, so this was actually a bit of a treat.

At 5:30 the driver returned to take me and Maria from the orphanage.  I returned back to the apartment after stopping along the way 3 times to take pictures.  I knew they probably wouldn't turn out, but had no way of telling Maria that so was happy to give it a whirl.  I was right though, I got nothing from those.  Oh well.  They wouldn't have been that exciting without the kids in them anyway.

To say this has been an amazing experience would be quite the understatement.  I can't even put into words how blessed I feel right now on so many levels.  The longer I'm here the more it sinks in that I'm here.  That I'm in the "home" of a boy and girl who call me Mom yet don't even have the legal right to do so.  That's amazing.  And there are still no guarantees.  But I can't love them any less just because I know that this is out of my hands and that there is a chance they could not come home with us.  I have to do this with my whole heart.  I want to do this with my whole heart even though my whole heart could be very broken in the end.  And if that happens I will know beyond a shadow of a doubt that these two will know love regardless because we will do everything in our power to make sure of it.  I don't really think that will happen, but there are many others who have gone before us thinking the exact same thing and then left devastated.  I just have to be real, but still love completely, with abandon.

Just like in the hosting experience, again I am the one being blessed here.  Blessing upon blessing is being poured out to me in abundance.  I know the kids are feeling blessed, too, but I am completely overwhelmed with gratefulness.  There is so much goodness going on here.  And I really do believe it's only the beginning.
at 2:52 PM