S'mores fun and a mommy who's no longer needed

We busted out the fire pit the other night to enjoy our first round of S'mores fun for the season.

Charlee gets particularly excited when the fire pit is unveiled after hiding in the corner or our yard the rest of the year.  After all you don't need a fire pit to roast marshmallows during Phoenix summer!  Perhaps her excitement has less to do with the fire and more to do with the fact that she's got free reign over the marshmallows, chocolate and graham crackers.  Yep, that's probably got a lot to do with it.  Oh well, she's happy and it shows.  Andee, on the other hand, would prefer to have Charlee do the roasting and toasting.  She's all about the chocolate and graham crackers, but not so fond of marshmallows.  And if you ask her, there's really no use in sandwiching all three together...she takes after her Mama.

In other news, there's a little thing called dropoff that we're pretty excited about around here.  Since the first day of school I have walked Charlee in through the gate, around the picnic tables, beyond the playground, just south of the tether ball court to where her class lines up when the whistle blows.  Once in line with shirt tucked in, I kneel to her level, give her a big hug and kiss, tell her to have a great day and then watch from the sidelines as flag ceremony commences.

This has been the ritual daily until yesterday.  We took Charlee's friend with us to school yesterday, but it wasn't until we were in the parking lot that we realized we left his backpack behind.  So, through the gates we all walked together, but once inside I told Charlee I needed to go home to get her friend's backpack.  I anticipated a protest, maybe a tear, but instead this was her response, "Okay, Mommy.  I'll line up with my class when I hear the whistle."

I thought to myself, "Wow, that was too easy."  "Okay, sweetie, I love you and I'll see you after school."  And off she ran to drop off her backpack and join her friends on the playground.  It was that easy.

Later that afternoon I praised her for her courage in not having me with her at flag ceremony.  Well, that only further boosted her courage levels apparently because today I didn't even get to walk her in through the gate.  Today, I was informed, "I just want you to drop me off at the gate from the car."

"Oh really?  Well, look at you fearless little one."  And then I almost shed a tear as I pulled away from the gate after letting her out of the car.  All this time, I've been secretly wanting to be like all the other moms and drop her off at the gate so I don't have to stand outside in the heat (or in the cold).  But now I'm realizing how much I need to cherish the being wanted and needed by my kids because it only lasts so long.  They get independent so quickly and then there's no going back.  Now, I will still attend flag ceremony occasionally because I enjoy watching Charlee with her friends and appreciate the fact that parents are encouraged to attend and be involved.  So, I'll definitely still make my appearances, but for now I'm going to let her walk in this newfound independence for a bit. 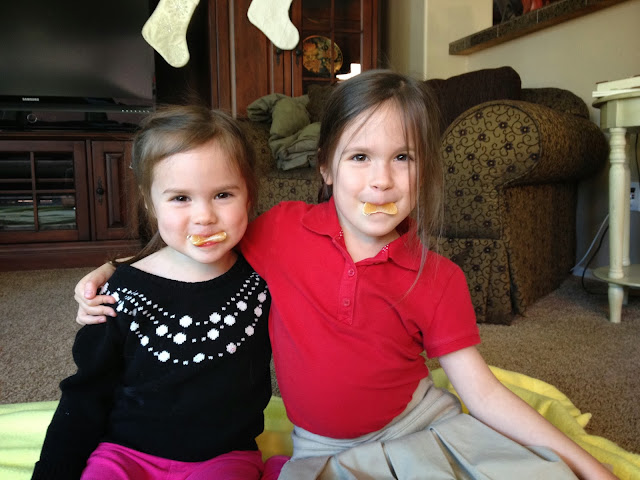 What I didn't expect was later this same morning when I took Andee to preschool and sat down beside her for a quick minute as she started her first activity that I would be told, "Mommy, I want you go home now."

"Oh, so I see you need me less now too, huh?"  Amazing the way this little 3 year old follows in her big sister's footsteps even though she hasn't a clue just how much Charlee paves the way, nor would she ever admit it.

It really was a sweet morning as I am reminded of just how much these little people are, well, people.  They are each so unique and I stand in awe of the God who created them, who knit them together exactly as they are to fulfill His purpose for them in this world.  These little girls with whom He's entrusted us.  They truly are incredible gifts.  I cannot imagine, nor can I even remember, life without them.