Let me back up to yesterday though.  Yesterday we spoke with our translator and asked him to contact the orphanage director to ask her thoughts on us sharing with Max our intentions.  Our translator told us the orphanage director was thrilled to find out that he has a family that wants him because she's "been worried about that boy."  Worried that while so many of his friends have families working so hard to come get them, that he would be a left behind.  She said that she would have the conversation with him and then, separately, with Kate.

This was all yesterday morning our time.  What we did not expect was that less than 24 hours later we would be sitting on a Skype call with him for the very first time.  But you know, when I stop and think about it, why wouldn't you immediately tell a child they have a family when that's what they've been waiting for their ENTIRE life.  I guess I just thought since everything else moves slower than I would like, that this would be no different.  Wrong!

So, we gather around the kitchen table this morning to call Kate.  It rings and rings until finally Kate's caregiver answers the call.  She knows us know as she's there every Wednesday morning when we Skype with Kate.  Kate was not there so she ran off out of the office to get her...so we thought.  But no less than a minute later, Max sits down in front of the computer.  Kate is nowhere to be seen.

"Uhhhhhh....  What does he know?  Have they told him?  Does he know who we are?  Should we say anything or just pretend like we called just to chat?  You know, because it's completely normal to Skype with someone you've never met who lives halfway around the world."  These were all the thoughts racing through our minds in that moment.

Having no real idea where to start, I said, "Hi Max.  My name is Ashley."  Then Adam introduced himself and we introduced the girls too.

To which he replied, "Yes, you are Kate's family that is coming to get her."

"That's right, we are."  At this point, I ask the translator if he knows whether Max has already been told our intentions.  He said, "I think he probably has."  Alright, well if he hasn't this is going to be really awkward and will completely blindside him, but we'll just assume he does and figure it out later if we're wrong.

With a deep breath and only a little hesitation I said, "We are Kate's family, and we would like to be your family as well."

His answer: "I agree with you" followed by a huge and contagious grin.

Oh my goodness...we just asked another child if he would allow us to be his parents!?!?!  What!?!?  I mean, that's not exactly an every day occurrence so why did it seem so normal, so natural?  I'm sure there are days that Charlee and Andee wish they had the option to answer that question...ha.

At this point, the orphanage director got on the call, too, and shared with us that when they told the kids earlier in the day "Kate got so excited that they would get to stay together" and that "Max cried when she told him because he has always dreamed of having a family."

Yes, 10 year old boys cry because they have hearts, hearts with desires that God has placed within them, hearts that yearn for a family.  After all, family is God's design.


God sets the lonely in families,
he leads out the prisoners with singing.
Psalm 68:6

Our conversation continued and we learned a little more about Max and some of his favorite things.  He loves to build things (I see Legos in our future...love that!) and he loves basketball.  Daddy's gonna have to step in for the whole sport thing, but I'm happy to be one of his biggest cheerleaders!  The girls turned the Christmas tree lights on and Max said, "Bright", at which point our translator said that we probably didn't need him anymore because he had quite a few English words he threw out during our conversation.  Smart boy!  We took them outside to show them the Christmas lights on the house.  They both thought that was pretty cool...what they don't know is that ours is nothing compared to other houses around...shhhh, don't tell them!

I cannot wait for the two of them to be home next Christmas.  To have 4 extra hands hanging ornaments on the Christmas tree.  To hang and fill two more stockings.  To gather around the fire pit together and roast marshmallows.  To be a family.  I.  Can. Not.  Wait.  And I can't think any more about that because the tears are already flowing.

We were really hoping to host the two of them this Christmas, but because of certain circumstances it will not be possible.  And I'm okay with that...now.  I will wait.  I remind myself that these two have waited 10 years so I can wait a few extra months.  I remind myself that our family is God's family.  He will knit us together exactly as He has planned according to His design and in His time.  There is nothing more beautiful, more freeing than letting go, saying and meaning, "Thy will be done."

I will write the story of how this all came to be and our decision to pursue Max, but that's for another day as his sisters are going to be awakening soon.  By the way, he seems okay with the idea of living in a house of girls.  I think knowing he will have a Daddy helps in that regard.  Now, the butterfly bathroom really may have to go, but because adoptions take longer than anyone ever wants, we have time to figure that one out.

For now, Adam and I thank you for your prayers.  We thank you for your love and for your support.  Many of you don't even realize it, but God uses you to keep our eyes focused on Him when we face discouragement and setbacks in this process.  We need you and we love you.  Thank you for allowing God to use you in even our lives.

I will leave you with just one picture for now from our call this morning... 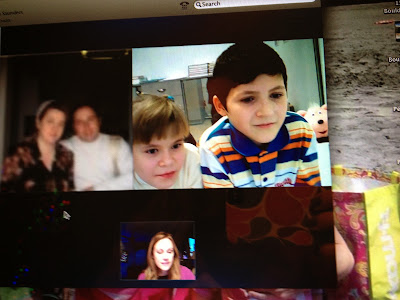 Only God could enable your heart to melt just as much over a sweet child's face that you didn't hold at birth as it does over one that you've been blessed to hold since birth.  Because He's that good.

Our Reece's Rainbow page has also been updated with the addition of his sweet face.  Obviously an old picture, but with a face that cute who cares how old the picture is! 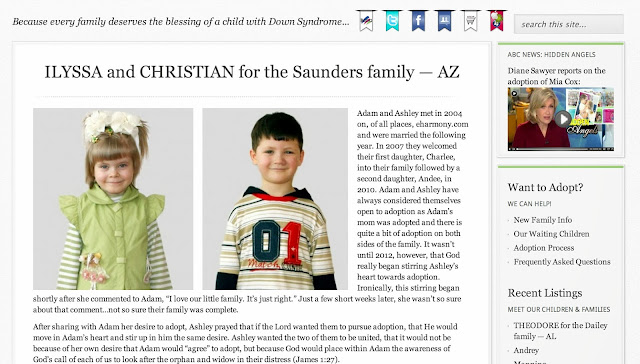