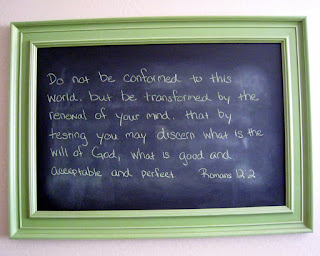 "Do not be conformed to this world, but be transformed by the renewal of your mind, that be testing you may discern what is the will of God, what is good and acceptable and perfect."


We have a chalkboard in our family room that has been hanging there now for almost two months. Until yesterday it hadn't been used for its intended purpose. This morning I finally decided to begin using it. My desire is that we would use it as a family to memorize Scripture together, especially since it's located in the area where we spend most of our time as a family...the kitchen and family room.
Romans 12:2 is one of my all-time favorite verses and probably one of the very first ones I really treasured growing up. I can still remember a bumper sticker I had that displayed the verse along with an image of a fish swimming upstream. I decided this is a good place to start and wrote it up on the board during Charlee's nap.
When I brought her downstairs after her nap, the first thing she said was, "Wassat?" (What's that?) as she pointed to the chalk board. I couldn't believe that was the first thing she noticed. Even she, this little 18 month old notices the small details of the world around her. So, I read it to her and she just smiled at me the whole time. When I was through, she signed and said, "More," meaning that she wanted me to read it to her again. For some reason she gets a really big kick out of me reading it to her and has asked numerous times since for me to read it to her again. She'll even be halfway across the room in the middle of doing whatever 18 month olds do and stop what she's doing and ask, "Wassat?"
I write this not because I think it's cool that my Charlee seems to want me to read Scripture to her, though I do think that's great even though I'm pretty sure she has no idea what it is. I write this because I believe God is using my little girl to help me memorize His Word and as a reminder that to me that it is so very important to hide His Word in my heart. One might think this is all just a small coincidence, but I believe in a God who is bigger than coincidence...much bigger. The God I serve works all things together for the good of those who love Him and are called according to His purpose. I have been called and for that I am eternally grateful! Thank you Lord for using this little 3 foot person to draw me nearer to You each day!
at 11:43 AM