The Fingerprints of God

This afternoon while playing upstairs with Charlee I had the strangest thought, or so it seemed at that moment. I thought to myself, "When she grows up into a woman, I wonder what it will be that she won't like about herself?" Okay, so I know this sounds slightly depressing, but for whatever reason it crossed my mind and I believe God used it at that particular moment as a reminder to me of this truth:

For you formed my inward parts; you knitted me together in my mother’s womb. I praise you, for I am fearfully and wonderfully made. Wonderful are your works; my soul knows it very well. My frame was not hidden from you, when I was being made in secret, intricately woven in the depths of the earth. Your eyes saw my unformed substance; in your book were written, every one of them, the days that were formed for me, when as yet there was none of them.
Psalm 139: 13-16
As I look upon Charlee I see perfection and beauty. That is because I am her mother and cannot imagine her any differently. I love her just as she is and that will never change. She can do nothing to take that love from me. I am saddened when I think of all the times that I have despised the way God created me all the while forgetting that He is Creator and I have no right to tell the Creator that He has screwed up in any way. It is my fervent hope and prayer that Charlee will grow up with a love for who she was created to be...that she could cherish every little thing about herself because she know that she was perfectly created for a specific purpose in this world. During a time of great struggle for me growing up, I held onto the words of this song by Steven Curtis Chapman:
I can see the tears filling Your eyes
And I know where they're coming from
They're coming from a heart that's broken in two
By what you don't see
The person in the mirror Doesn't look like the magazine
Oh, but when I look at you it's clear to me that...
I can see the fingerprints of God
When I look at you I can see the fingerprints of God
And I know it's true
You're a masterpiece
That all creation quietly applauds
And you're covered with the fingerprints of God
Never has there been and never again
Will there be another you
Fashioned by God's hand
And perfectly planned
To be just who you are
And what He's been creating
Since the first beat of your heart
Is a living breathing priceless work of art and...
Just look at you
You're a wonder in the making
Oh, and God's not through, no
In fact, He's just getting started and…

I hope that Charlee will always know that she was perfectly planned and fashioned by God's hand. God's masterpiece given to us... 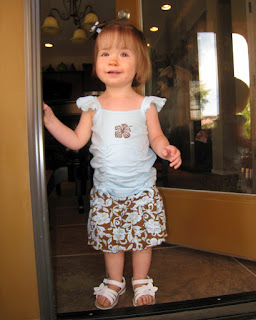