Today we began making the rounds in town. For some reason Grandma and Grandpa think it’s really fun to show me off. I don’t know if I’m really that cute, but they sure think so. So first, we went to Humphreys Auto Parts Store (that’s the store Grandpa Saunders runs). Next we headed to Buenz (the big drug store in town) and then to Safeway to stock up on some food and diapers for me.

Later in the day (after I recovered from the morning adventures with a good nap) we went up to the hospital to meet some more people there. This was the first time I’d been in a hospital since I was born. Gosh, I sure have grown up a bit since the last time. We met Joel Engdahl who’s a really good friend of Grandma and Grandpa’s. He carried me around his office for a bit and I’d have to agree that he’s a pretty cool guy. He’s a physical therapist and has helped Grandma a whole bunch with her recovery after her knee surgery. Then we walked right next door and sat with Grandpa for a little bit while he got his infusion. I’m not exactly sure what that means, but it’s something he has to get done to help keep his cancer away. Everyone at the hospital really enjoyed meeting me.

I just have to add a little side note to explain the picture below. So, Grandma has this really pretty, shiny bracelet and I just had to get my hands on it. I really like to swing it around and bang it on things, but boy oh boy when I put it in my mouth I was majorly surprised. It does not taste good at all, which really surprised me since it’s so pretty. I made some really terrible faces about it for a long time afterwards. Gosh, I just don’t know why Grandma has such a pretty bracelet that just tastes so yucky. Doesn’t make a whole lot of sense to me! 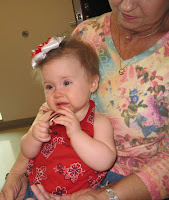 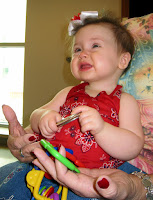 Later in the day, Grandpa decided to be really goofy (well, he's always goofy, but this was especially goofy!)...he stole my hair bow and thought he'd see how it looked in his hair. What do you think? I think they're probably best suited for little girls. =) 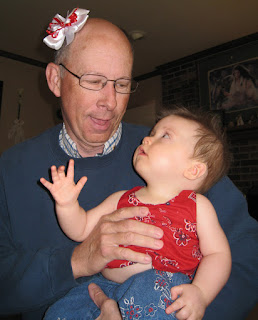